Veteran actor Noman Ijaz has left Twitter ablaze after proudly admitting of having extramarital affairs and ‘cleverly’ hiding them from his wife.

During an interview on with Iffat Omar, the actor spoke about love and betrayal and confessed that his wife is oblivious about him cheating on her.

However, Noman Ijaz faced heavy backlash from netizens over the contentious statement given by him, in light of him previous controversial remarks about the #MeToo movement.

This man in one interview says he often cheats on his wife & he’s such a great actor that she never finds out. When iffat asks him about #MeToo he dismisses the movement and says “yeh sab deen say dori hai”
Pakistani men are just work of art! pic.twitter.com/9knbMAne4Y

Apart from receiving criticism, legendary actress Atiqa Odho has come out in support of Noman and advised the public to just stop it now.

Taking to her social media, she wrote: “My dear friend Noman Ijaz. You really know how to get people’s attention! Trust you to joke about infidelity and people start to take it all so seriously. Great way to get their attention. Hats off to my buddy Rabia for also laughing it off knowing her husband loves to poke people’s imagination.

She further added, “You are so naughty and entertaining. Never a dull moment on and off-screen. Anyway, just keep smiling and exposing others petty mindedness. Shame that they can so quickly judge you on a light-hearted moment on camera and disregard your years of service in the entertainment industry. Look ahead my friend and continue on your path of success as always. Stay blessed.” 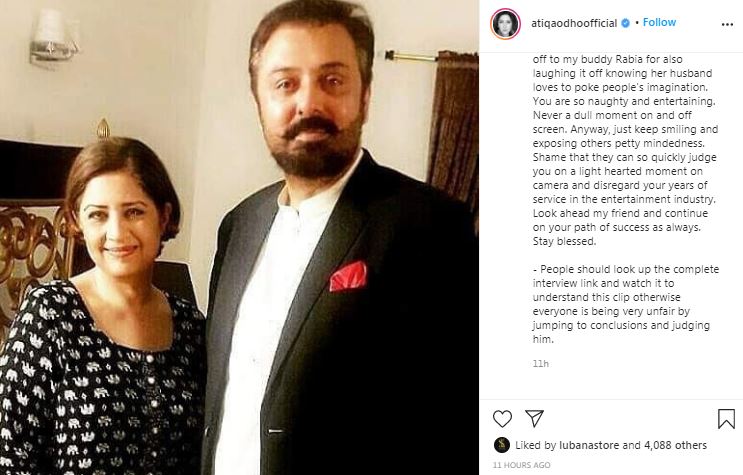