Yasir Hussain, famed Pakistani actor and host, frequently manages to irk the crowd with his outspoken personality. It appears the star has once again incurred the wrath of the public.

In a recent Instagram story,  Yasir Hussain shared a tweet featuring pictures of the two Pakistani individuals resembling to the actors of Diriliş: Ertuğrul. The tweet deemed them as the ‘Pakistani Turgut and Pakistani Ertuğrul.’

However, It is very clear that the actor once again turned his guns towards the Turkish stars, terming them ‘international garbage.’

Furthermore, fellow actor, Anoushey Ashraf clapped back at Yasir’s comment as she schooled him in the comments section.

She said, “Let’s just gently remind Yasir that NO one is Kachra for one. And even if their work isn’t at par to his liking, actors from around the world must be respected,”

“It should be an unspoken ‘bond’ of mutual respect between artists. You’ll know your struggles better than the world does. Having said that Ertugrul is far from kachra, if anything the series is an eye-opener for how people are finally rejecting ‘kachra’ work at home and looking out for better scripts, shows, and budgets,” she said.

However, Yasir seemed bothered by the comment and asked her to “calm down”. He also reiterated his stance saying that he did not mention Ertugrul in his post. 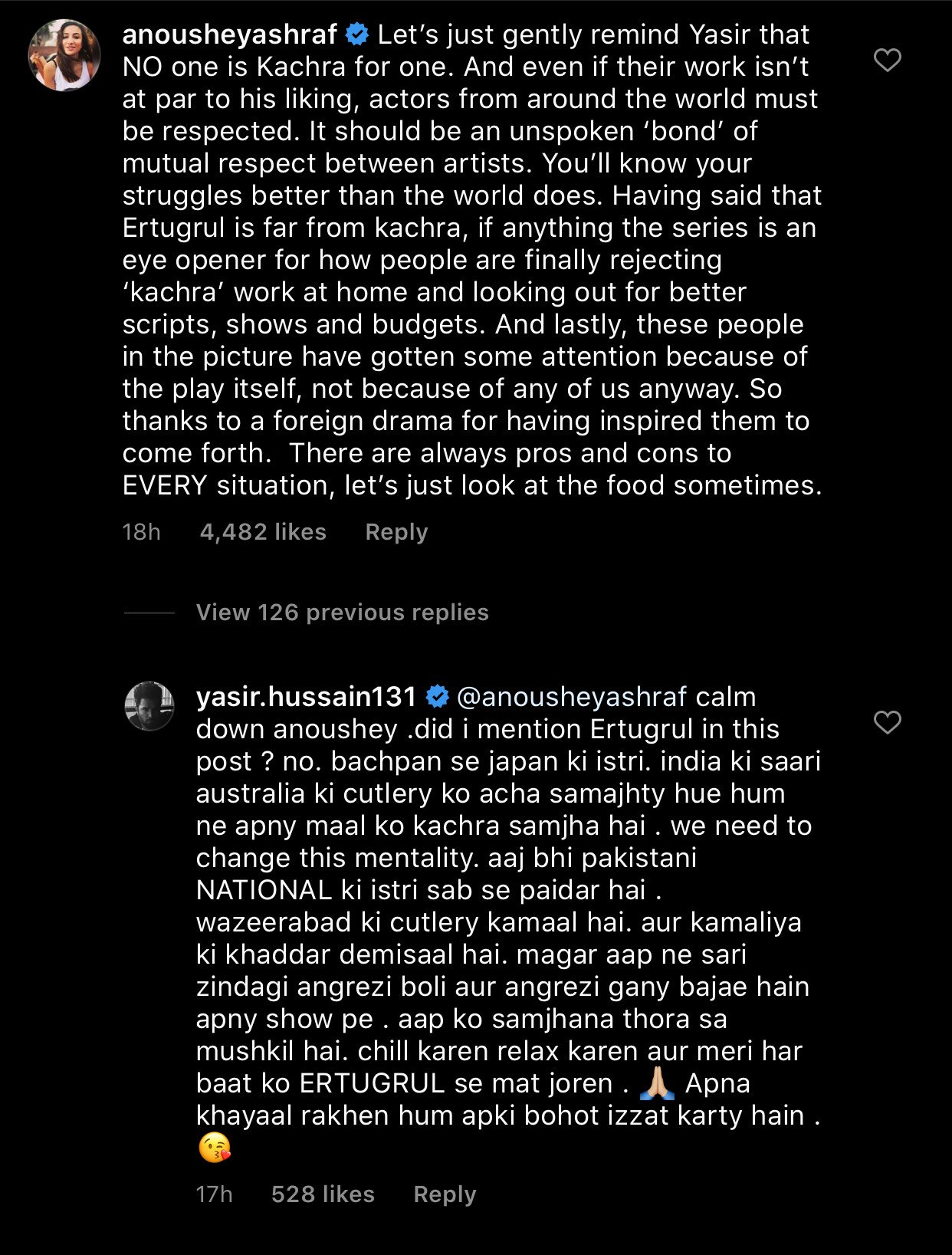 On the other hand, the Jhooti actor is receiving heavy backlash for his ‘sarcastic’ remarks and disrespecting the Turkish actors.

#YasirHussainIsTheRealGarbage is trending on Twitter with memes flooding in order to mock Yasir Hussain.

Have a look at how the actor has sparked fury on Twitter:

#YasirHussainIsTheRealGarbage
He needs serious mental help, he has been engaging in immoral controversial activities with his wife in live TV show before thr marriage, wch our society doesn’t allow,How can anyone in society expect good from such man, throw this local garbage out pic.twitter.com/RQQIuLnrKN

I know you want attention but this will not be good 😂#YasirHussainIsTheRealGarbage pic.twitter.com/7PufGeioQQ

Yasir Hussain thinking deep how to do shit #YasirHussainIsTheRealGarbage pic.twitter.com/zQyHAgYivI