India observed 26th January as ‘Republic Day’. However, chaos was seen as farmers carried out a tractor rally that began from various areas of the capital Delhi.

According to the reports, farmers’ protesters in India have been camping at the entrances of New Delhi since November in protest of the agricultural laws. The sector will be brought under control.

Thousands of tractors decorated with India’s large tricolor flags had already gathered at the main points of the three entrances to the capital Delhi before the main day.

Another 10,000 farmers have gathered in the western city of Mumbai to show solidarity with the protesters.

The government has deployed security forces across the capital to keep farmers away from an important traditional day (Republic Day) in India’s political calendar.

The government had opposed the farmers’ rally, saying it would be a “disgrace to the nation” on such an important day.

The new agricultural laws will allow farmers to sell their produce on the open market. Earlier, however, they sold products through government agencies that guaranteed the lowest prices.

Indians have expressed outrage as the hashtag #TractorVsTraitor becomes a top trend on Twitter. 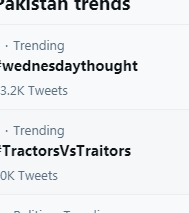 Let the World Knows: BJP is the Real Traitor!

It is highly condemnable that the BJP-led government, on this day of independence declaration, had unleashed a shameful act of state violence on people, participated in #TractorRally against farm laws.#TractorsVsTraitors | #RedFort pic.twitter.com/XwDv9ppHBZ

Today on 72nd Republic Day, lakhs of farmers who have been protesting for over 60 days now, demanding the rollback of the 3 anti-farmer agriculture laws are going to carry out tractor rally starting from various parts of Delhi border inside city. #TractorsVsTraitors pic.twitter.com/valhOznb1C

Anti social elements infiltrated farmer’s protest otherwise it was peaceful, Police also changed the route, the farmers’ voices will continue to rise till their interests are secured
Govt needs to repeal the Bill immediately to save life of farmer’s#TractorsVsTraitors pic.twitter.com/GiVw5ih3Jd